A while back I did some acting, of sorts. Appearing in a TV show for ITV called Bottom Knocker Street. It’s a kids show, starring my old mate Phill Jupitus. I played several characters, in a selection of weird wigs and crazy costumes. It gets shown on CITV at various times. Well worth a watch if you get the chance. Honest.

BTW that’s me in the tiny purple hat! 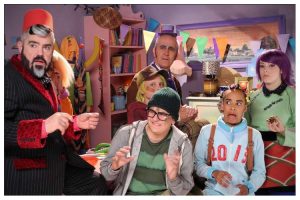 A couple of years I co-wrote and appeared in a couple of series of a preschool music show called The Bopps for Nick Jr UK.